Since 1958 our family-owned, Italian-made line of ranges, ovens and cooktops has been a preferred appliance brand featured in upscale kitchens throughout Europe. This year marks the 20th anniversary of Verona in the U.S. market.

From 2001 to today, our brand offers a wide range of cooking appliances suitable for any size kitchen on both sides of the Atlantic. To honor this milestone, we want to take you on a journey through the evolution of our product line innovations – highlighting what makes Verona the chef-inspired appliance maker for those who want the look and functionality of a professional appliance for their home. 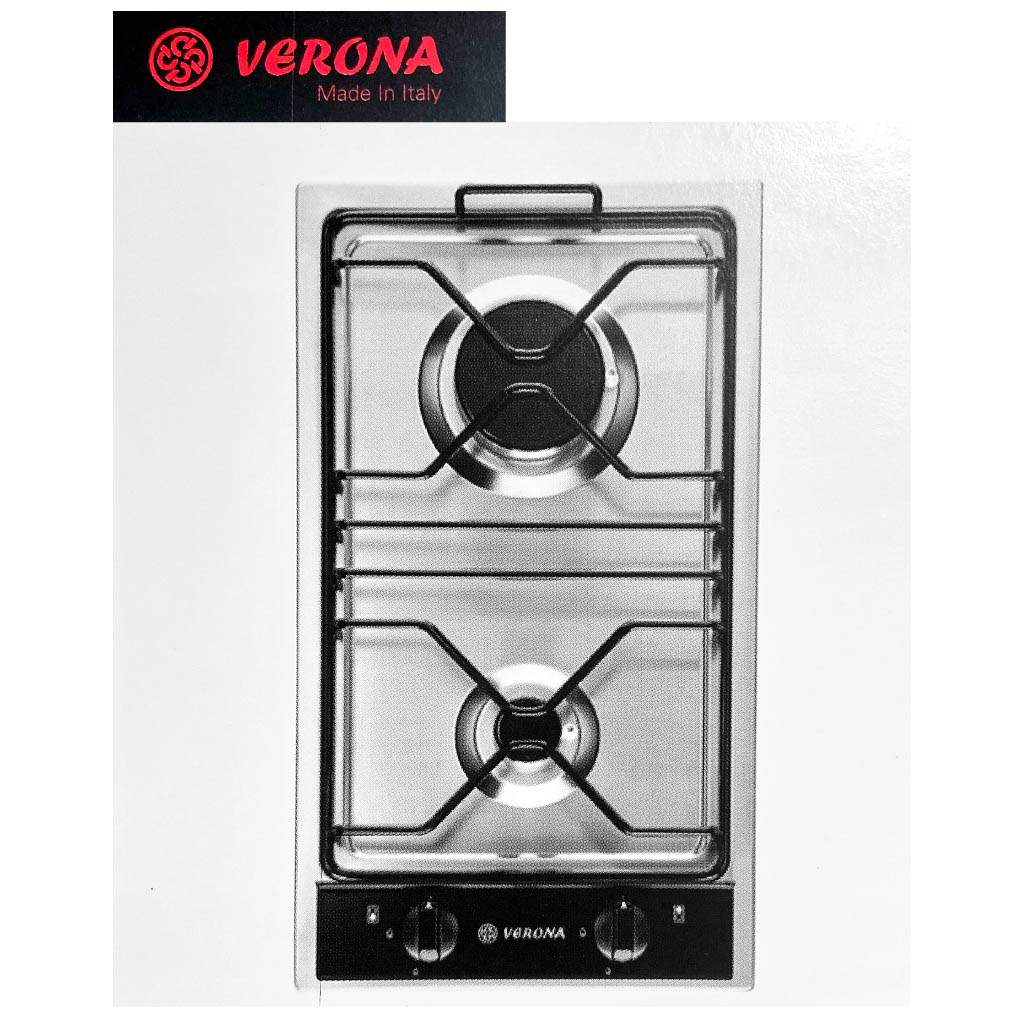 The one that started it all… Verona’s 12” gas cooktop, which featured one large and one small sealed burner with electronic ignition launched in our debut year. Finish offerings included Black, White, Bisque and Stainless Steel. The compact 12” model was part of a full cooktop collection that was available in up to a 36” size. 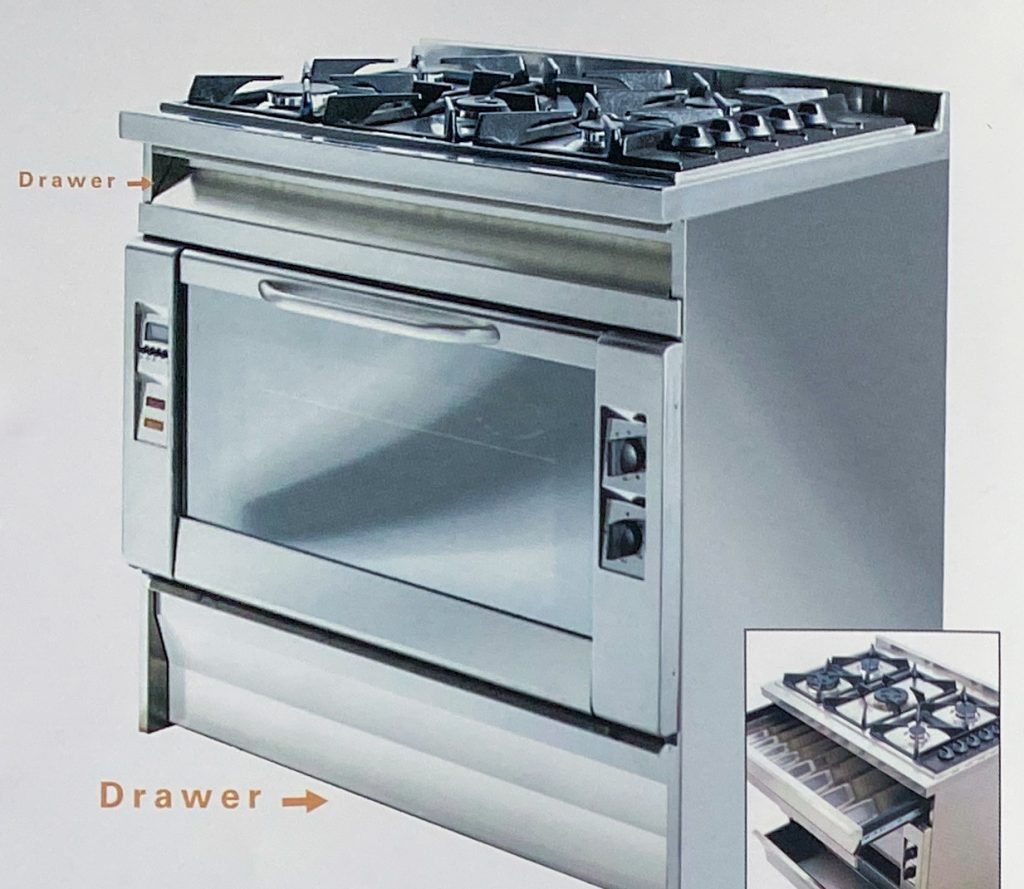 We introduced a full collection of freestanding ranges, including our popular Verona Professional 36” and 48” dual fuel and 24” gas ranges. The pro-restaurant-inspired look and functional features set the stage for Verona as a true cooking appliance that is attainable for at-home chefs. 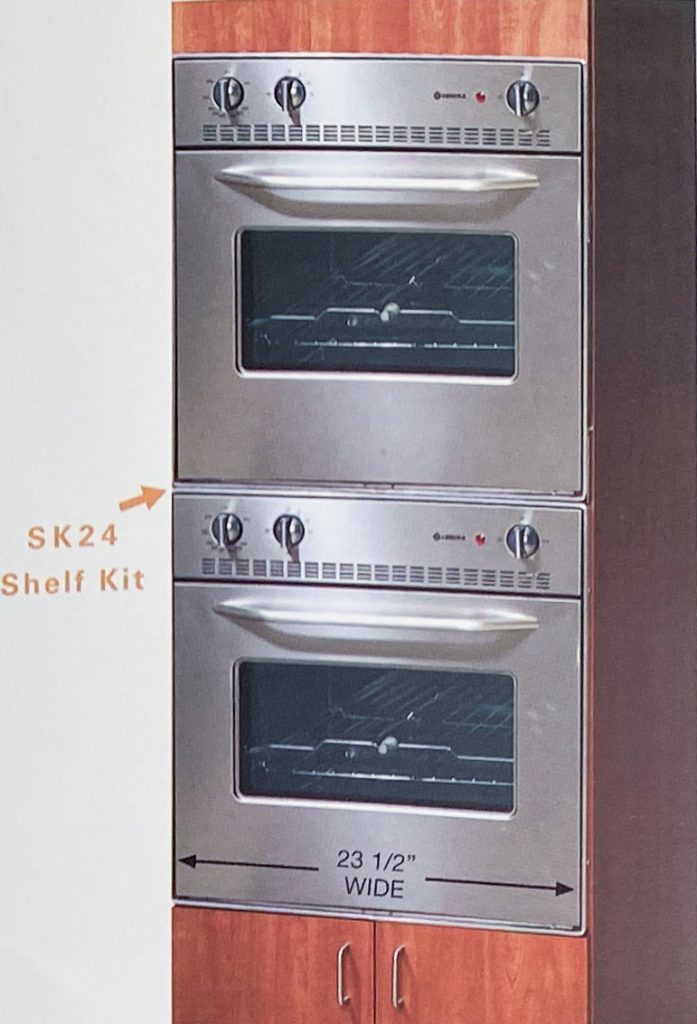 Verona built-in ovens were launched in 2005 and included the ever-popular 24” gas model, which remains a Verona exclusive today. The individual ovens could be installed as one unit or used with a stacking kit to create a seamless, stunning stainless-steel double oven display. 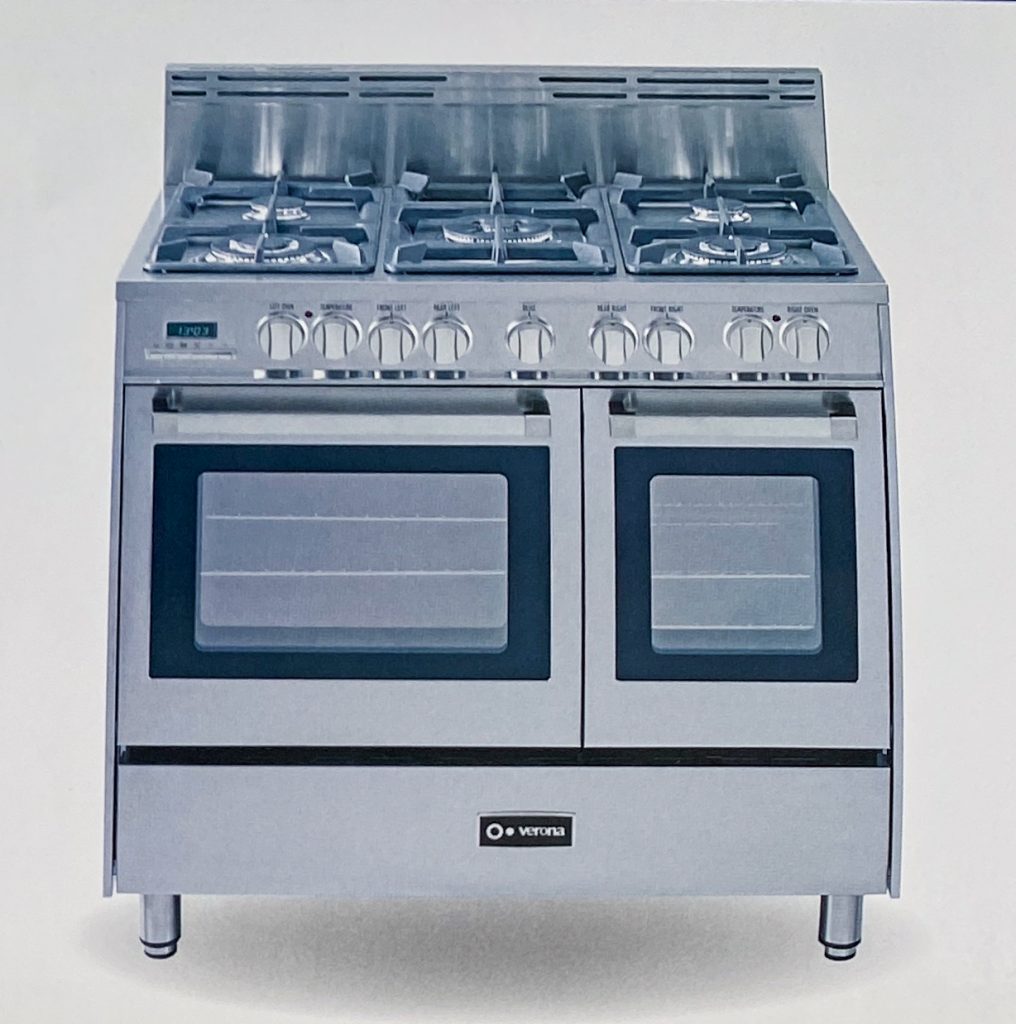 In 2010 we introduced the exclusive 36” double oven ranges, available in both dual fuel or all gas models. These ovens are a true multitasker, as they allow home chefs to bake dinner and dessert at the same time.

Verona debuted a variety of color options for the range collection. In addition to stainless steel, we added matte black, burgundy, antique white and white to our color palette. 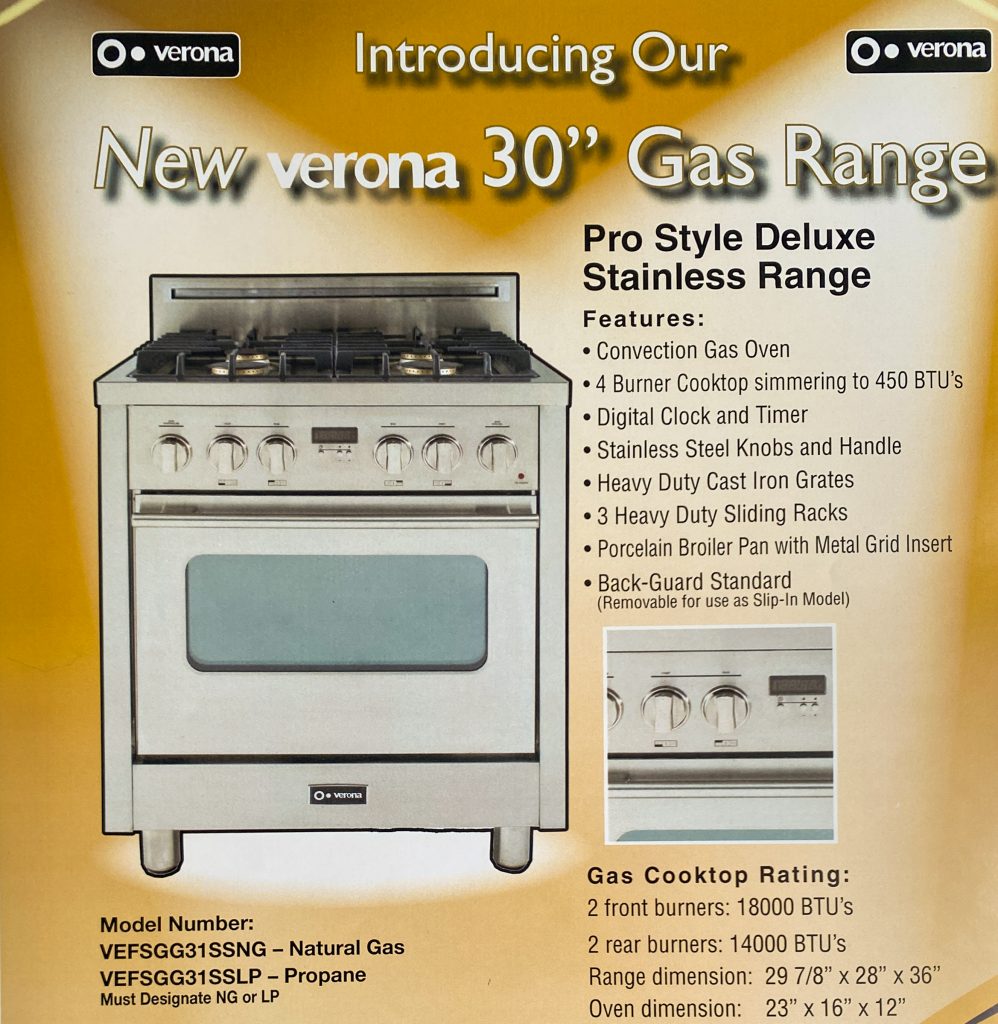 This was a big year for Verona Appliances with the launch of a standard American-sized 30” Pro Style Deluxe Range. The new Collection was engineered specifically for the US market and was packed with professional quality features such as a convection gas oven, four burner cooktop, a digital clock and timer, heavy-duty cast iron grates and more.

Also launched in this year was the VeronaPro line, which included upgraded 36” and 30” ranges, a 30” gas wall oven and 36” gas cooktop, all with powerful brass German-made burners and many aesthetic upgrades. 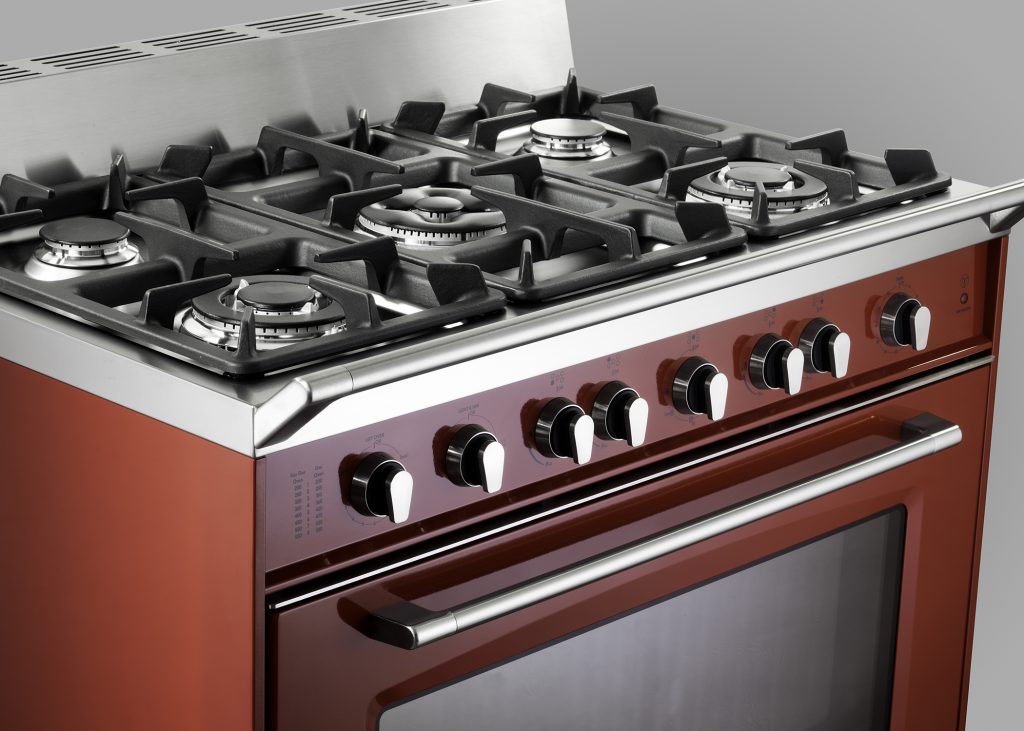 In 2015, Verona debuted the 36” Classic range that combined the very best of industrial design and cooking performance. The range was a recipient of Design Journal Magazine’s Best of 2015 Products award. With the launch of the trend-setting Classic look, the Verona logo also received an update transforming into today’s iconic square design.

Also introduced in this year was the 36” fully-electric N’ Series Range, which still stands as an iconic model for the Verona brand. At the time of its release, the N’ Series Range was the only fully electric range on the market. 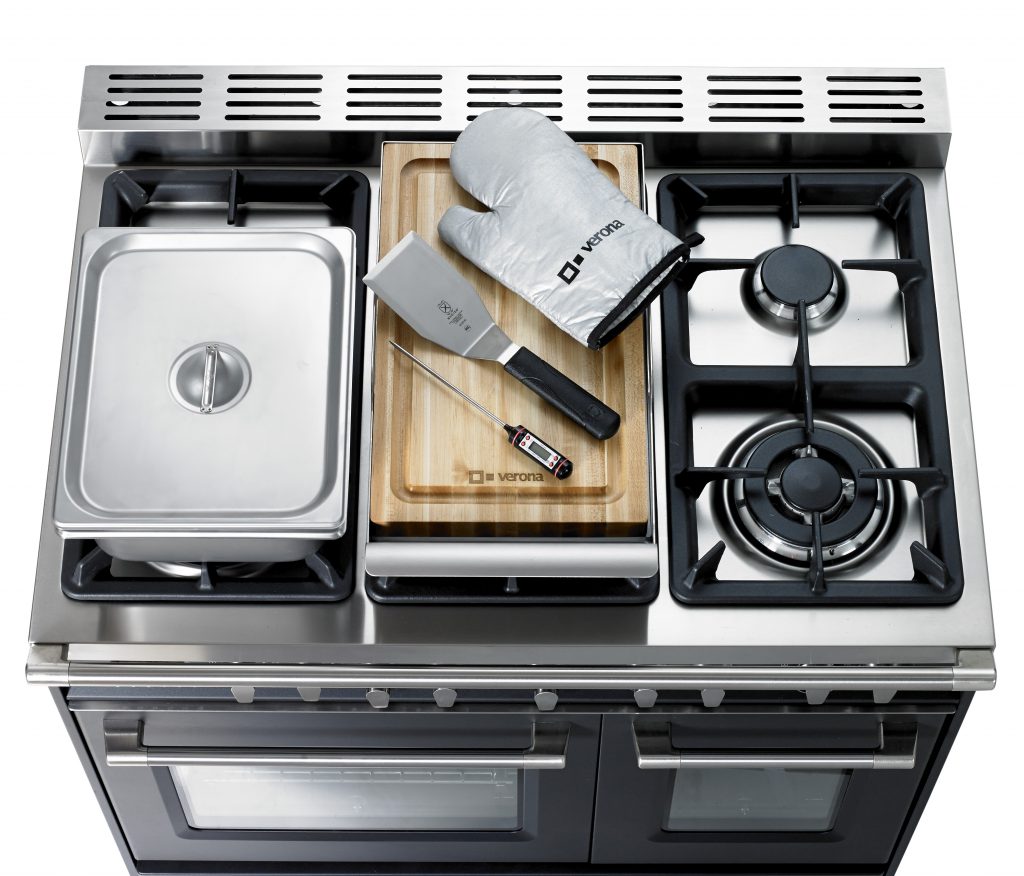 The Chefs Pak was released in 2016 to the delight of many home cooks. The accessory package included a heavy-duty stainless-steel griddle, 3” x 5” beveled spatula, digital meat probe and more. 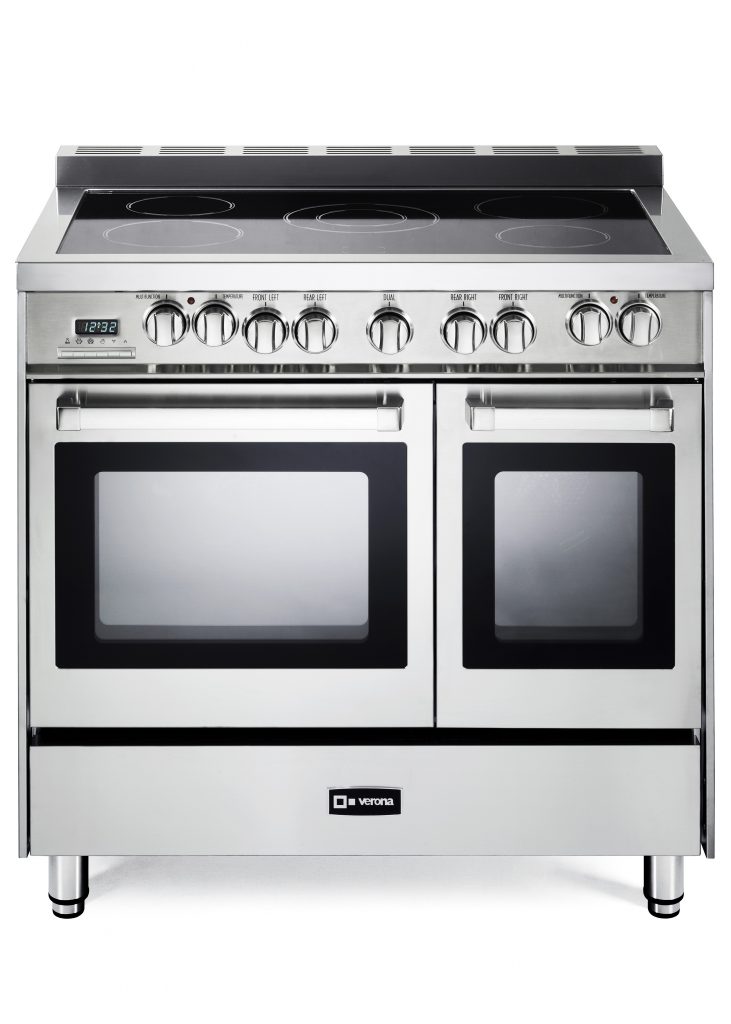 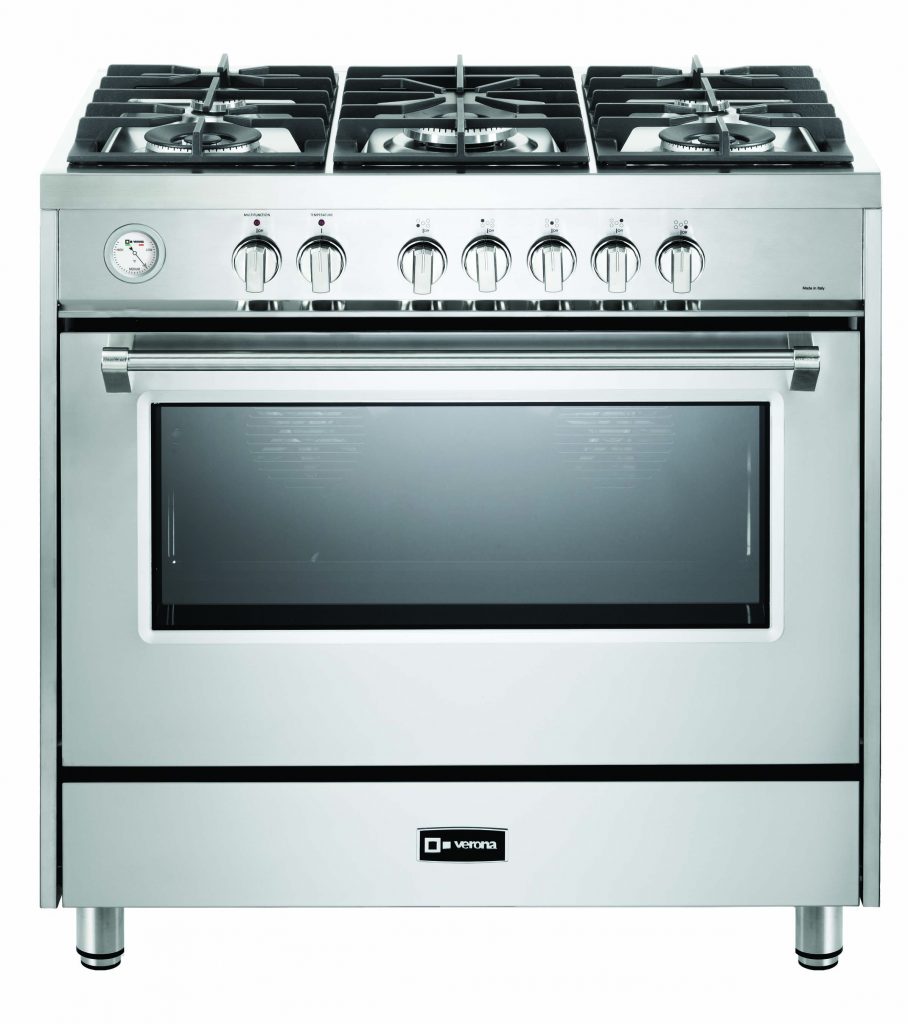 The Designer and Prestige series was added to our extensive line of 36” freestanding ranges in 2018. The ranges featured both performance and aesthetic upgrades such as brass burners, rounded handles, continuous cast iron grates, a modern knob design and clean, beveled doors. 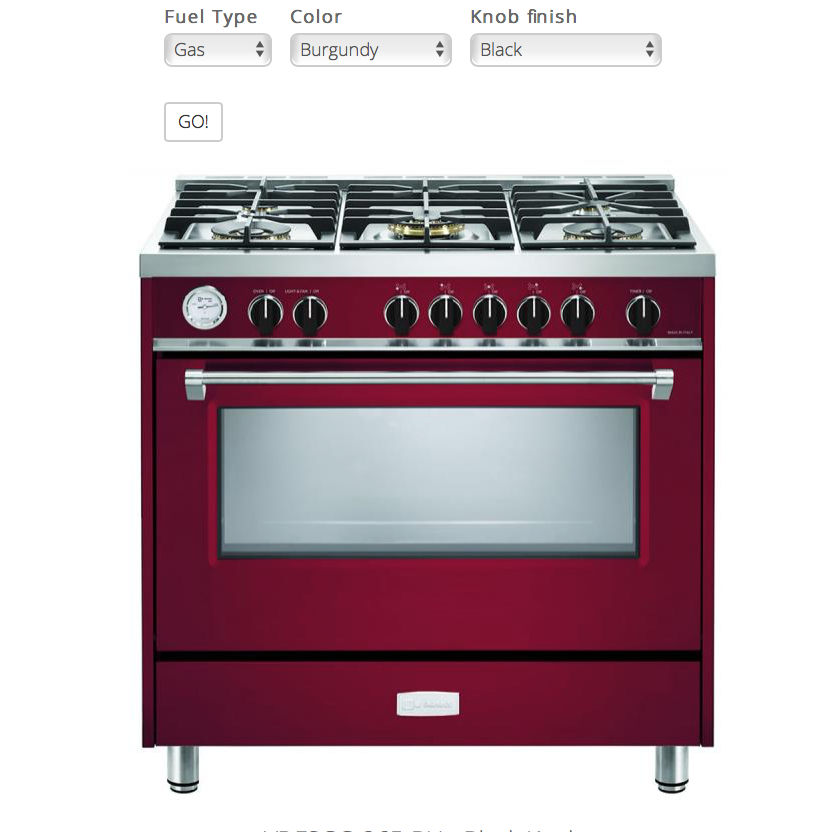 Verona added two new colors and colored knobs to our line for the Designer series, plus an online Designer Range Builder Tool that allows interior designers and homeowners to customize their very own Designer Series range. The “Designer Range Builder” provides users the option to preview any combination of fuel type, knob color and base color for their personalized appliance. 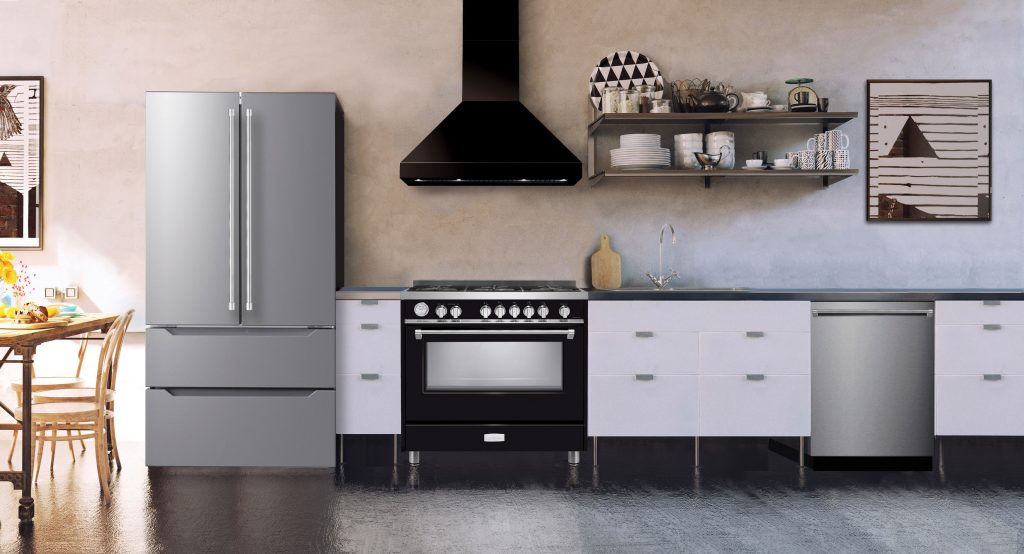 Verona added non-cooking appliances to their line to offer a complete kitchen suite including new refrigerator and dishwasher for the first time. In addition to this exciting development, Verona also expanded its popular Designer series with Dual Fuel and Induction 36” ranges and ventilation options for wall-mounted, chimney hoods and built-in inserts. 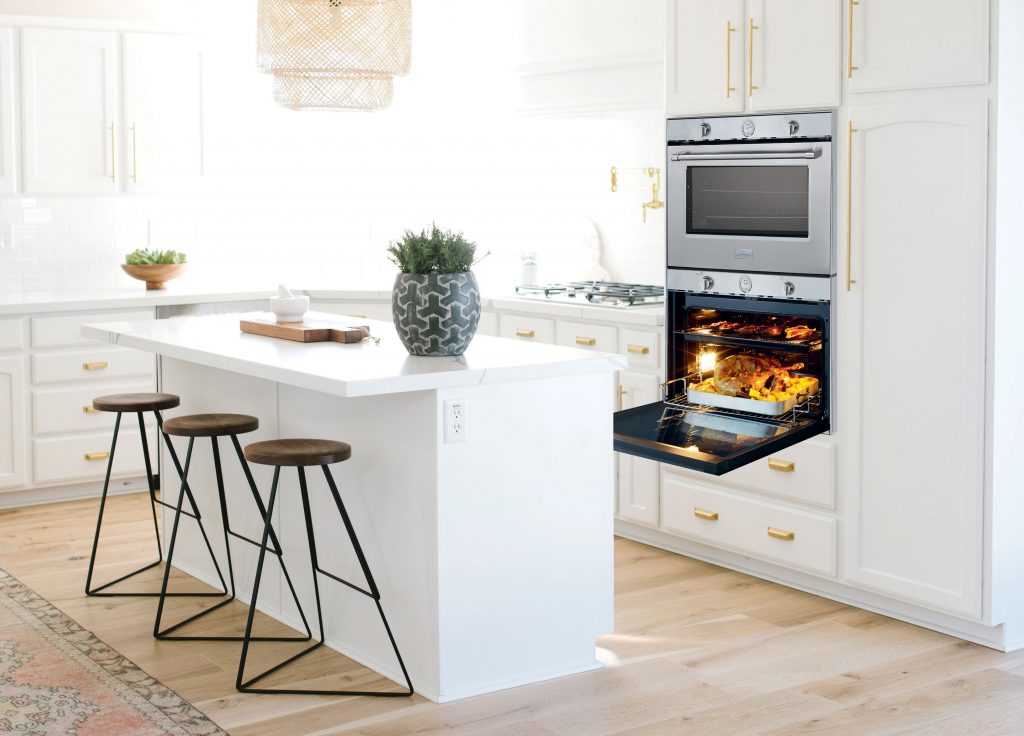 Kitchens are one of the most considered rooms of the house when it comes to interior design and thoughtful space planning. They are where most begin and end their day, provide a place for gathering and entertaining and are where families can connect after a long hectic day. When Principal Designer, Abbey Robertson, of aaNovo, and her team were tasked with designing a new custom spec build in Indianapolis, Indiana, the result in the kitchen was breathtaking. With a passion for building, selecting quality products and implementing design methods that will stand the test of time, Robertson turned to Verona Appliances to help make this new house a home for future owners to enjoy for years to come. 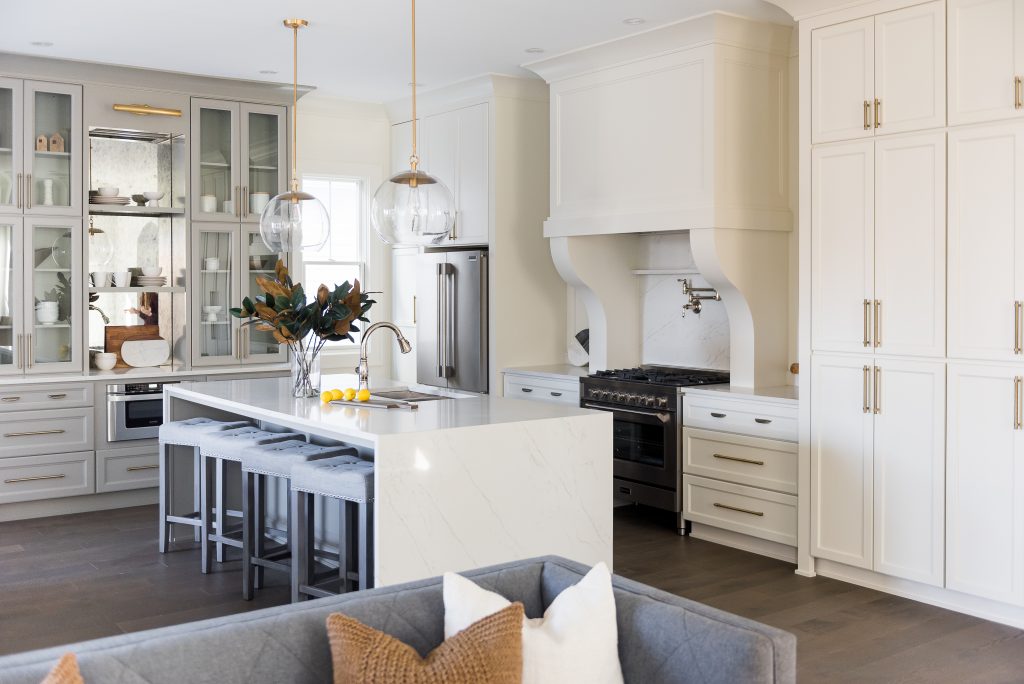 With the objective of presenting a timeless and functional kitchen, Robertson based her design inspiration on the transitional style of Cape Cod homes. “Our goal was to nod to traditional details in our design through our choice of the interior architecture while remaining mostly transitional in our design elements,” said Robertson. “We choose the 36” Prestige Series Gas Range for this project because it checked all those boxes. We appreciate the design aesthetic of the range and quality of the product.” 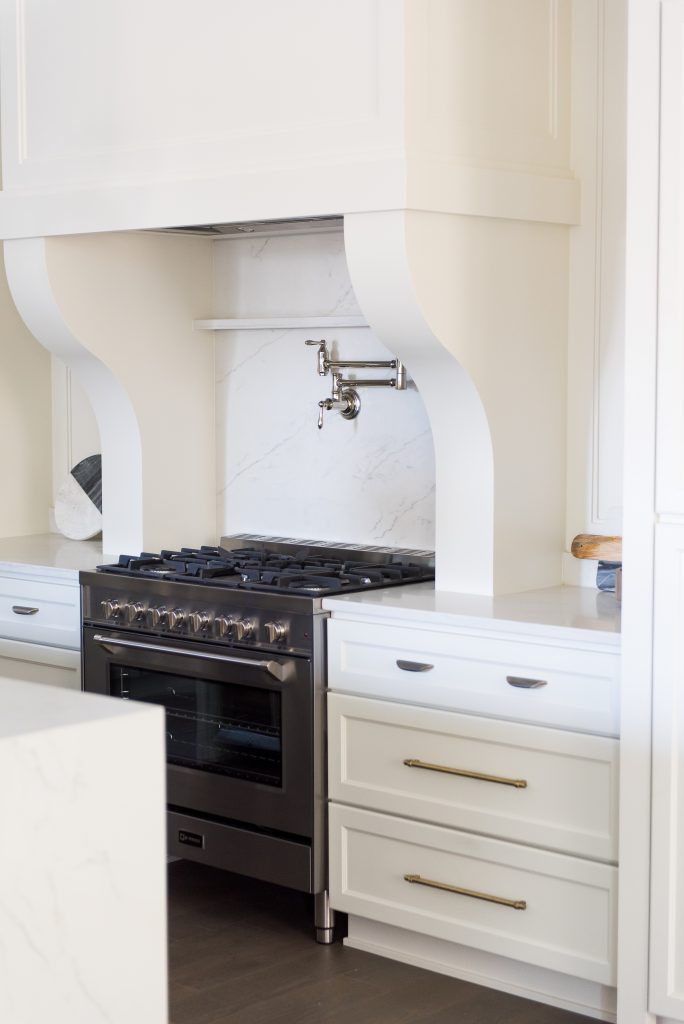 With a home design project, homeowners tend to feel stuck with a specific style or time period. Rather than staying glued to one particular style, the team at aaNovo allows each project and space to define their design. In this kitchen, Robertson opted for contemporary countertops and backsplash as well as a traditional range hood cover to create a unique focal point around the Verona range. 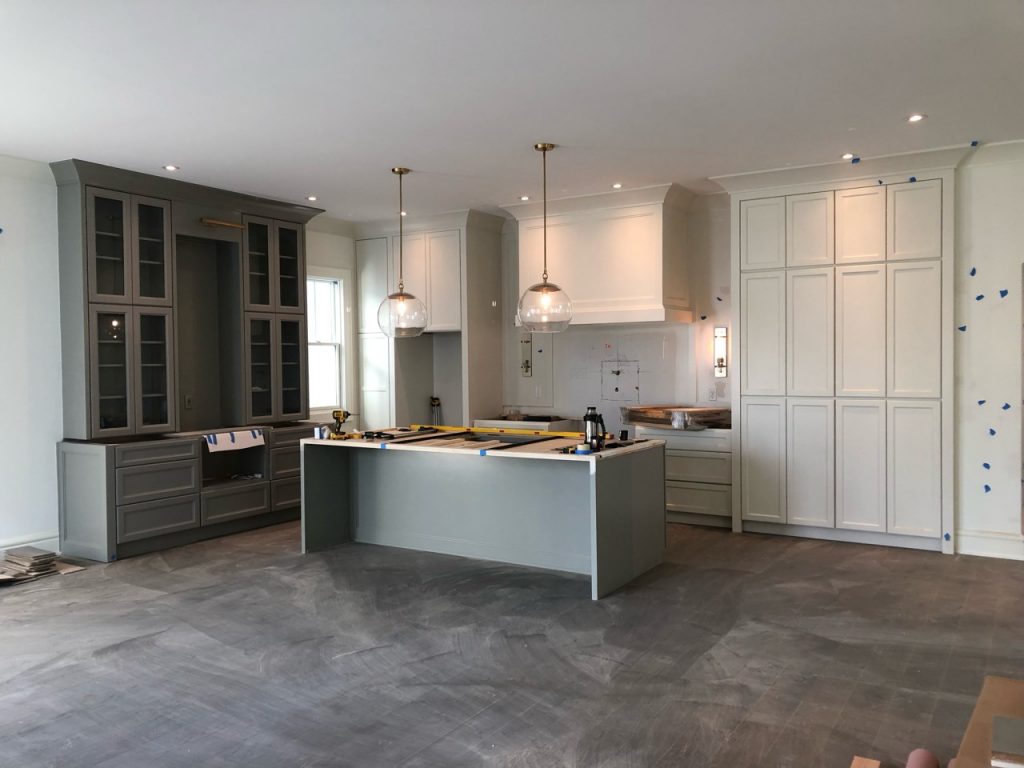 Although the completed design is nothing short of stunning, Robertson faced some difficulties along the way.  “We designed the range hood with corbels to bring in some traditional curves to the space however this inclusion was our biggest challenge during the design process. We had to find materials for the hood that were heat resistant and could be molded or cut to the right shape,” said Robertson. “We solved this challenge by adding the shelf above the range which split the backsplash into two pieces rather than one large piece. This way it didn’t take away from the coffee bar slab and allowed us to utilize all the pieces of the quartz without seams on the countertops.” 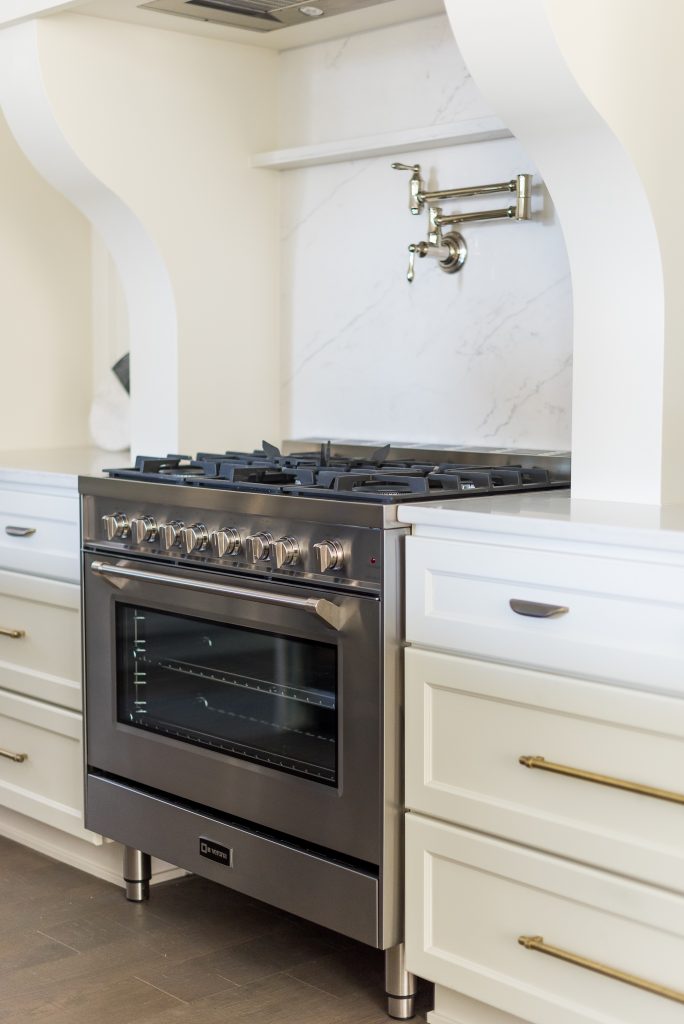 In the design world of consistently changing trends, classically designed interiors are a breath of fresh air. As custom spec builders, Abbey Robertson and her team at aaNovo strive to carefully select the design elements in their homes that will strongly represent their quality of design and meet the desires and needs of future homebuyers.  They certainly achieved their goal by bringing the warm and transitional style of Cape Cod into the heart of Indianapolis! 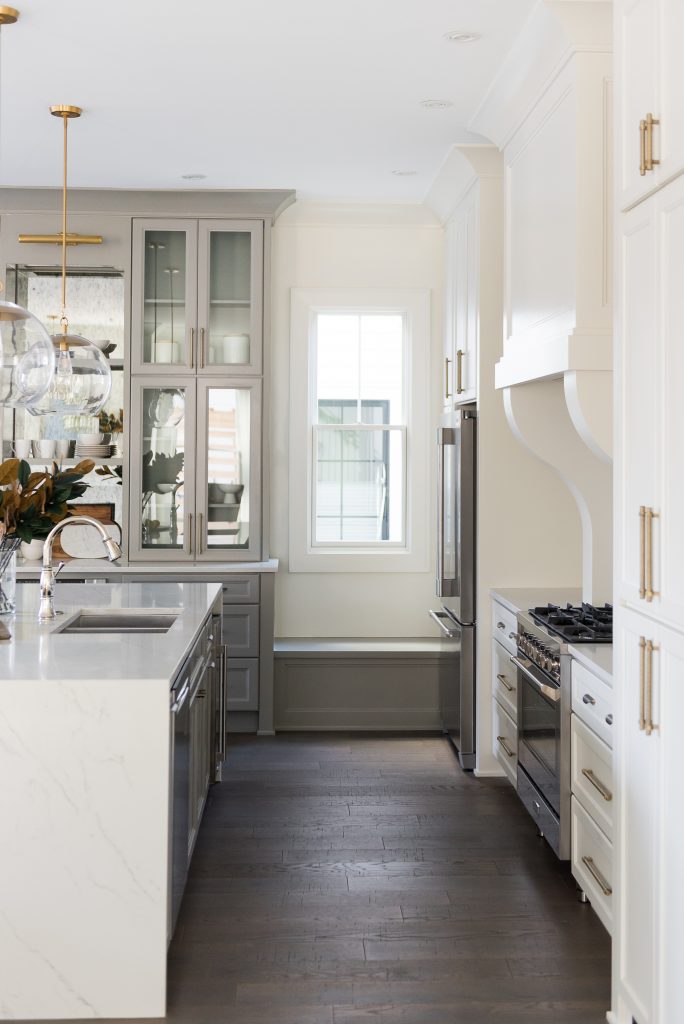 Thank you, Abbey Robertson and aaNovo for choosing Verona Appliances for your kitchen and sharing your project with us! For more design inspiration from aaNovo click here or follow them on Instagram and Facebook.

Hi there! We’re Katie + Cara…two best friends and moms who are passionate about turning a house into a home! Your home is where you come to rest from the cares of the world with the people you love most, so shouldn’t it be the place you enjoy most? The best way to create a relaxing environment is to remove clutter and keep only the things that you feel to be beautiful and have purpose. 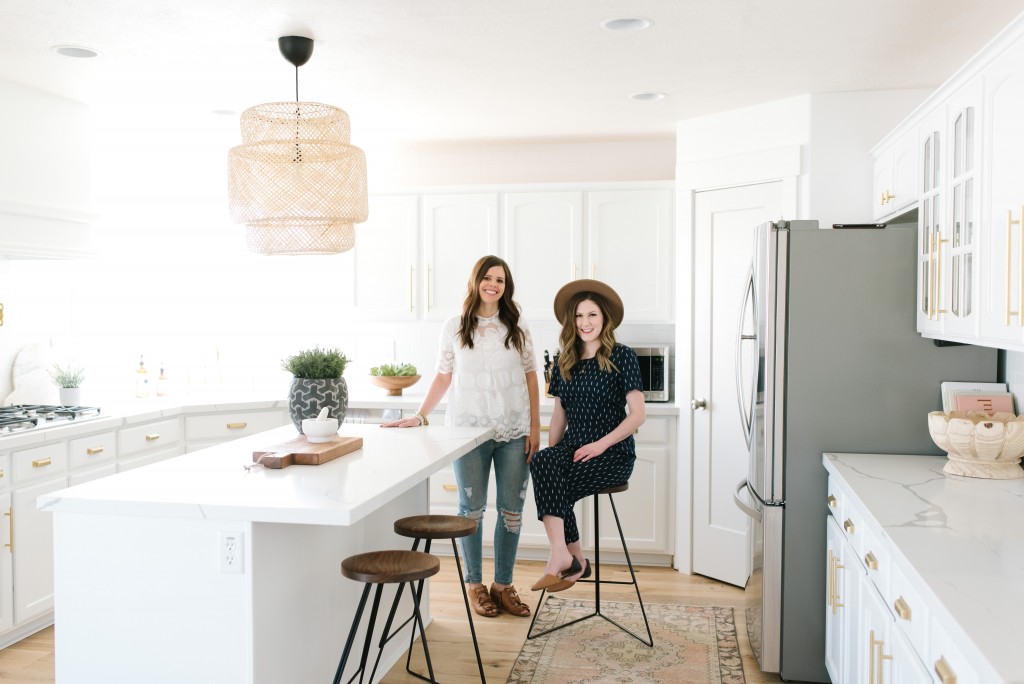 Katie recently moved into a fixer upper that had a lot of charm but was in need of a lot of work. The large and spacious kitchen was the main selling factor, but it was also the room that needed the most work. 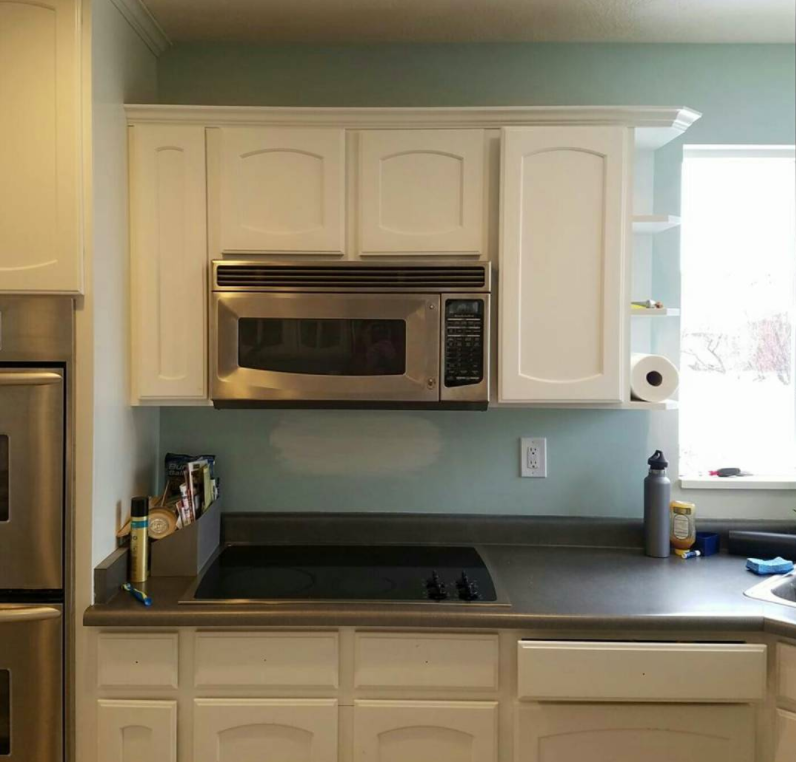 First up on the kitchen renovation list was to create a neutral backdrop. We said goodbye to the orange toned cabinets and painted them a fresh coat of white. Formica countertops were replaced with a beautiful quartz and the walls were covered in a classic white Subway tile. The kitchen was looking much better but we wanted it to feel more “gourmet”!

To achieve more of a high-end look, we removed the cabinets and microwave above the counter to create a more open feel. We got rid of the dated electric cooktop and instead installed a Verona 30” gas cooktop with a custom built range hood above it. It instantly changed the entire look of the kitchen by opening it up and creating a more modern look! The trendy configuration of the burners and knobs fit perfectly with the aesthetic of the room.

Switching out the cooktop from electric to gas came with more bells and whistles. There’s just something to be said about cooking on an open flame, isn’t there?! With the Verona Gas Cooktop we are now able to heat our food more quickly, and even have the option to simmer soups and sauces on the low heat setting. The continuous grates give us the ability to move around our pots and pans as we cook without ever needing to pick it up off of the cooktop. 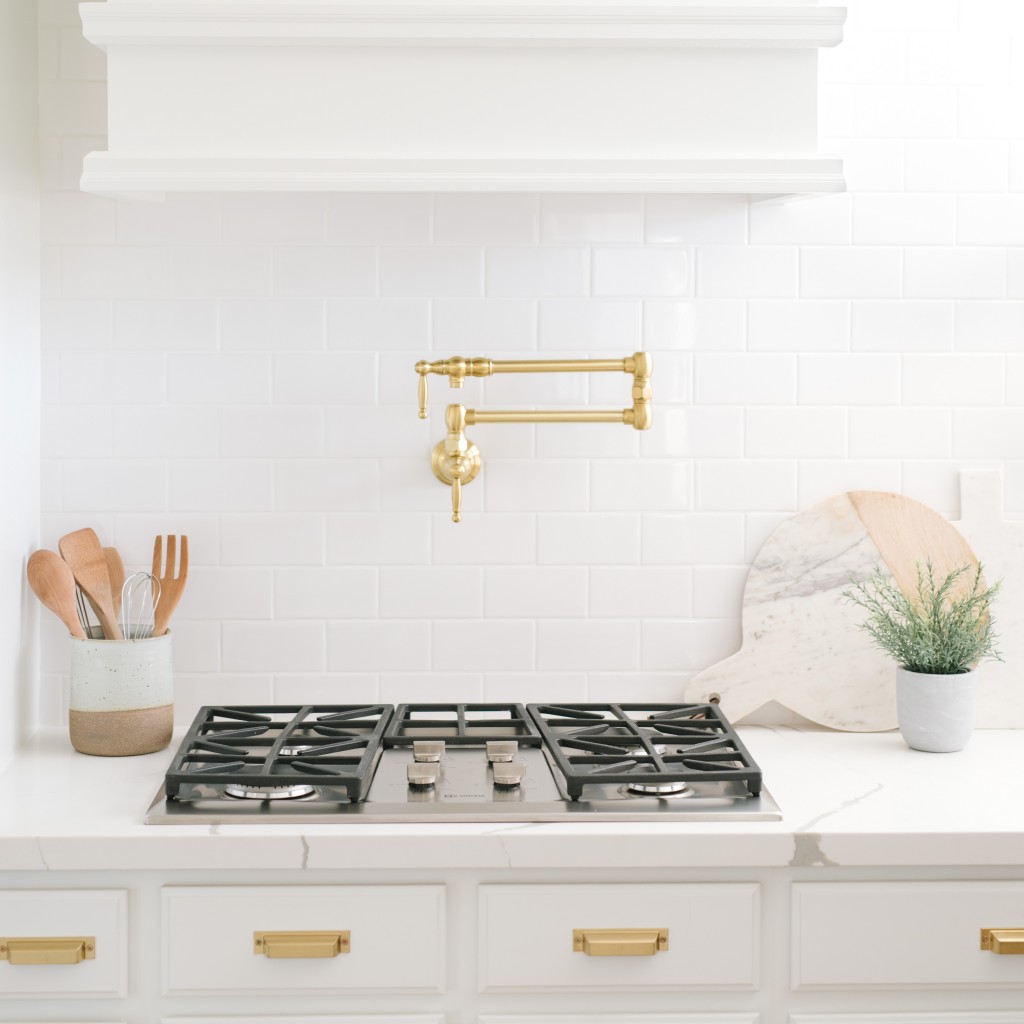 We finished off the kitchen with modern fixtures, accessories and added a few personal touches to make it feel more like home! The kitchen is the heart of the home and by creating a relaxing environment we now have a space that we can enjoy gatherings with family and friends for years to come! You can follow our home renovation journey on Instagram, at @Blythe_and_Barnett. 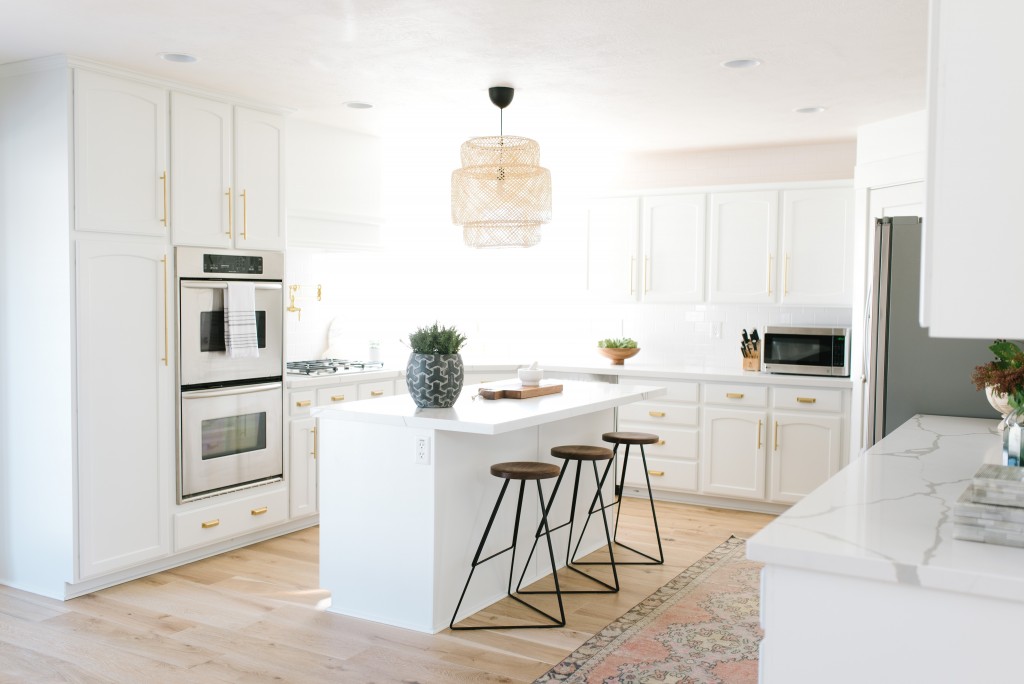 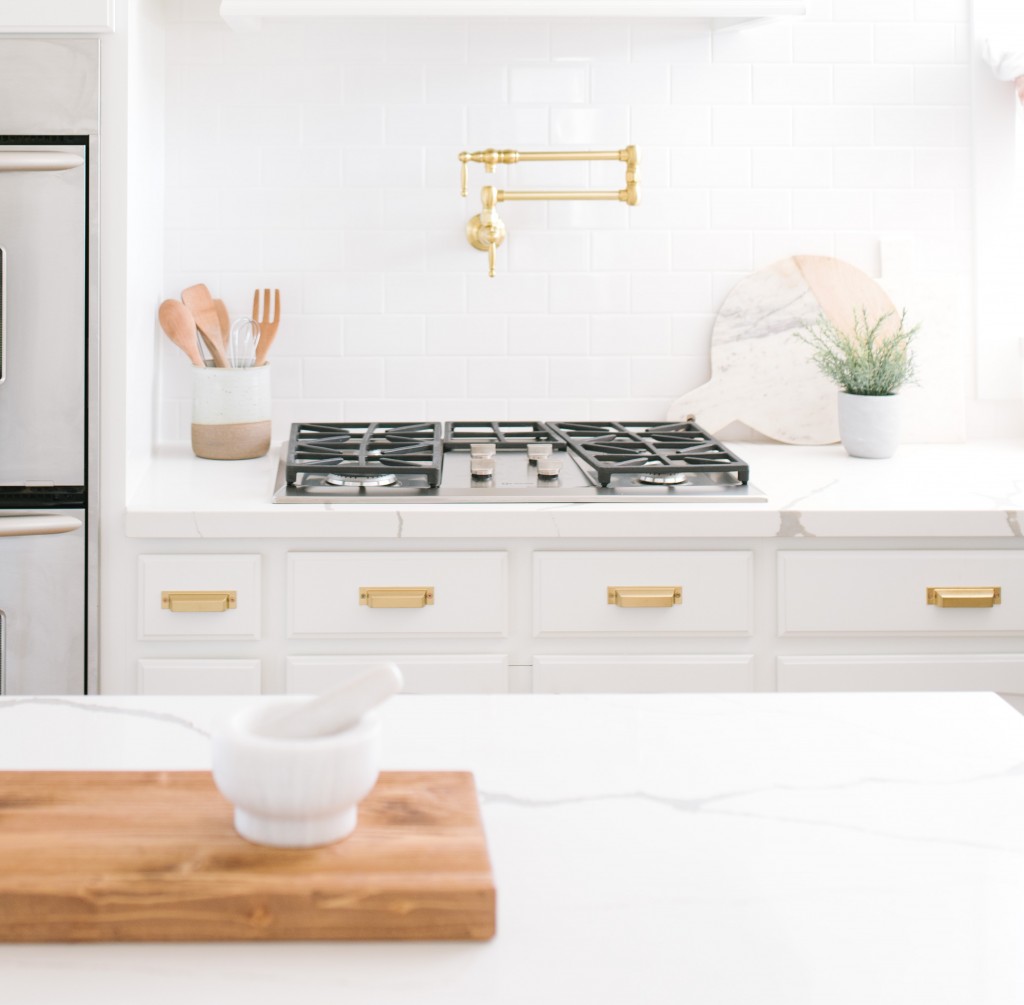 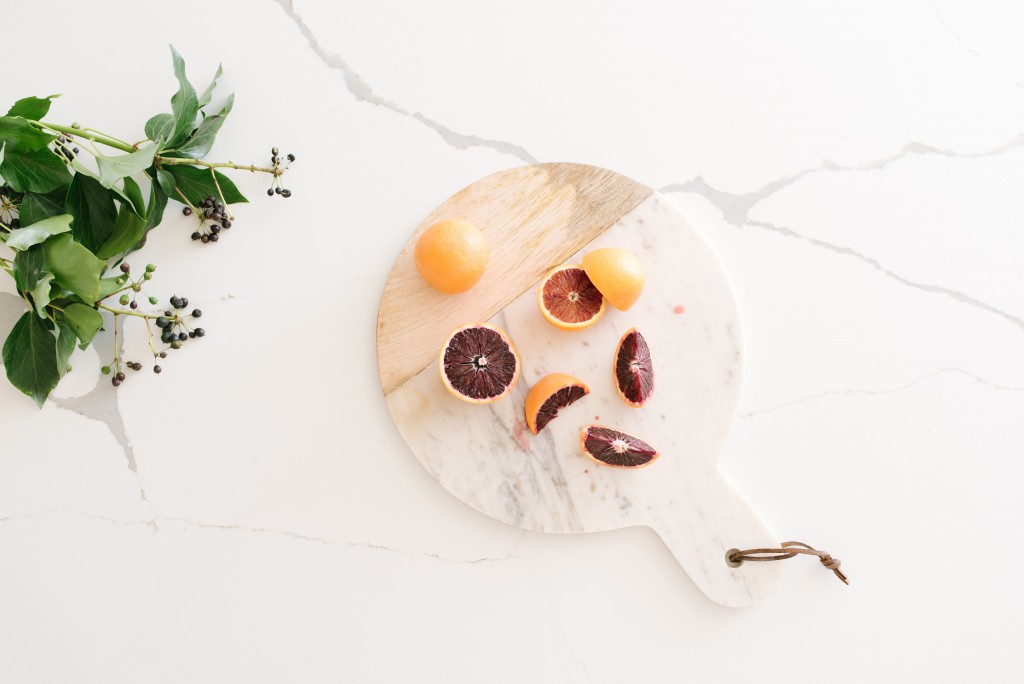 With Verona Appliances, big things come in small packages! And that’s exactly what renovators had in mind when transforming a small summer cottage into a fully outfitted year round home.

In Provincetown, Massachusetts Cape Associates, a building and remodeling company specializing in fully custom projects, was tasked with not only turning the 300 square foot cottage into a year round space, but equipping it with all of the conveniences of modern living.

“The Summer cottage could not be expanded vertically or horizontally due to code restrictions so all the requirements for year round living needed to be fit into the existing footprint,” said project manager Derik Burgess. “This necessitated very careful planning and customization in order to fit it all in.”

The kitchen was completed with a 24” Verona Gas Wall Oven and a 12” Deluxe 2 Burner Gas Cooktop. The appliances were specially chosen by the client, he himself being a principal at Studios Architecture.

Thank you, Derik and Cape Associates for sharing your Verona Renovation Story and transformation images! 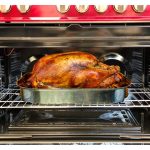 Whether you’ve decided to attend or host Thanksgiving this year, safety will be top-of-mind for your family and friends. Although experts agree there is no completely “safe” way to hold a traditional Thanksgiving dinner, here are clever tips for creating new traditions that honor the spirit of the holiday while creating memories for future ones….

END_OF_DOCUMENT_TOKEN_TO_BE_REPLACED

The stylish Verona line of ranges, ovens, cooktops, ventilation, dishwashers and refrigeration are a preferred brand of appliances featured in upscale kitchens throughout Europe since 1958. EuroChef USA is proud to offer the Verona line in the U.S. market through an authorized network of distributors and retailers. Learn More About Verona Appliances
Learn More About EuroChef USA 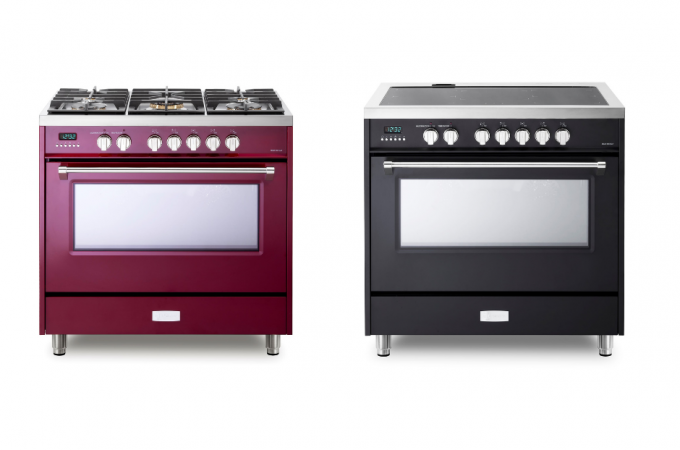